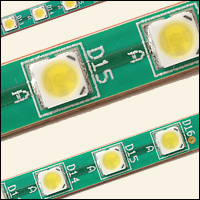 LED (Light Emitting Diode) backlight design provides advantages that can be highly beneficial in a variety of applications and industries. LEDs offer longevity (50,000 hours minimum), far greater resistance against shock and vibration, reduced power consumption and heat emissions, brighter intensity and more precise control of that intensity. Light from the LEDs in an LCD (Liquid Crystal Display) screen is diffused to illuminate the viewing area evenly.

Two different configurations exist for LED backlighting: array and edge-lit. Array lighting–in which LEDs are mounted uniformly behind the LCD screen to distribute light evenly–offers the advantage of increased contrast, resulting in greater depth of color. Edge lighting places the LEDs on the sides of the screen (usually the top and bottom) rather than behind the screen, which allows for a thinner package and reduces power consumption; this comes at a cost of a slight deficit in uniformity.

Although most commercial LED rails for LCD displays are designed to be driven serially, General Digital employs a serial-parallel design philosophy, whereby we drive the LEDs in groupings of three or four. The advantage to this method is that instead of rendering the entire rail inoperable, a single LED failure will only affect its immediate grouping (soft failure). This means that singular or multiple LED failures will not render the monitor inoperable, and in most cases will still provide a very uniform backlight–essential for mission critical applications.

Also of interest to military and heavy industrial needs is the fact that LEDs are ideally suited to sunlight readable and NVIS (Night Vision Imaging System) applications. Their longevity, superior brightness control, and resistance to shock, vibration and weather extremes makes them an almost obvious pick for use in harsh environments. Other LED backlit display benefits include reduced EMI emissions, operation at low temperatures (-40° C), and virtually instantaneous full brightness for those mission critical situations. Other applications can benefit from LED backlighting, such as digital signage, construction, and aviation, to name a few examples.