In the world of flat panel monitor systems, many technical terms are used daily that are considered “normal” to anyone in the industry. These terms get used so freely and frequently that we forget lay people may not be fully familiar with their meaning. At least in the context in which we’re using them. We hope our readers find this list helpful.

Color depth, also known as bit depth, is either:

The contrast ratio is a property of an LCD, and is defined as the ratio of the luminance of the brightest color (white) to that of the darkest color (black) that the system is capable of producing. A high contrast ratio is a desired aspect of any display as it displays a richer image. Contrast ratio shares similarities with dynamic range.

Laminating film is the technique of manufacturing a material in multiple layers, so that the composite material achieves improved strength, stability, appearance or other properties from the use of differing materials. A laminate is a permanently assembled object by heat, pressure, welding, or adhesives. Film lamination is commonly used to improve or alter the performance of an LCD. 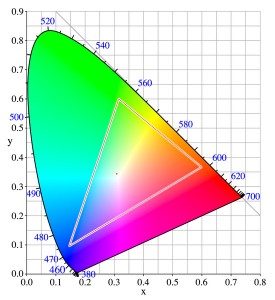 Color gamut is the full range of color that a display can reproduce, and is commonly expressed as a percentage of NTSC. Although NTSC (National Television System Committee) was developed to provide television standards for North America, in the context of color gamut, 100% of NTSC refers to the full range of color that can theoretically be displayed. A display that can combine both high luminance and a high percentage color gamut should provide the best image reproduction capability.

When Night Vision Goggles (NVG) are in use, a standard LCD monitor appears washed out (blooms), rendering it unreadable. A display that is NVIS (Night Vision Imaging System) compatible renders a readable screen while wearing night vision goggles.

An on-screen display (OSD) is a control panel on a monitor or television screen that allows the user to select viewing options and/or adjust properties of the display, such as brightness, contrast, and horizontal and vertical positioning.

Dot pitch (sometimes called line pitch, stripe pitch, or phosphor pitch) is a specification for an LCD, computer printer, image scanner, or other pixel-based device that describes the distance from the center of a pixel (or sub-pixel cluster) to the center of the next pixel, typically measured in millimeters. 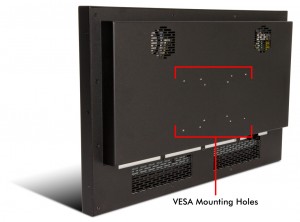 The Flat Display Mounting Interface (FDMI), also known as VESA Mounting Interface Standard (MIS), is colloquially known as VESA mount. It is a family of standards defined by the Video Electronics Standards Association (VESA) for the mounting of flat panel monitors, televisions, and other displays to stands, articulating arms or wall mounts. Commonly available mounting patterns include 75 mm, 100 mm, 200 mm, 400 mm, 600 mm in a square or rectangular arrangement.